Thoughts on well-being, sustainability and those things that constitute a good life beyond consumption. 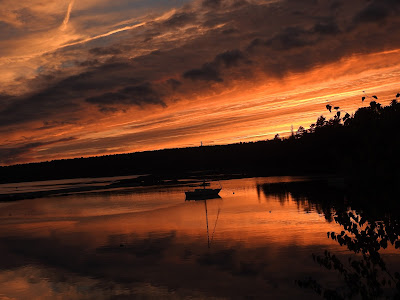 I had prepared myself for the pending proverbial empty nest, knowing that my youngest son would be graduating from high school this year. Plans for college were made, and then, we got that call. A most unusual offer: the top choice institution, the one he was wait-listed for, was offering him admission. The catch: the offer was only good if he took a gap year and started the following fall (i.e. 15 months after graduation). For him, it wasn’t even a decision, he had a secured a spot in the top-ranked university of his choice.

Normally, this news (about being accepted) would be cause for celebration. But sadly, the joy of the moment quickly became overshadowed by the unexpected death of my father. Even now, almost six months later, the pangs of grief remain sharp. I take some solace in having had the chance to visit him in Michigan for his 80th birthday celebration – a time of joy and great fun with family and friends. Before I left to come home, we had breakfast, laughter, and hugs. His heart failed him as I flew back to Pennsylvania. At least it was quick, not the prolonged deterioration and demise that can be the fate of people with terminal diagnoses of certain cancers or ALS.

Early summer brought the death of our 21-year-old cat – our boys had never known a time without her. As a kitten, she had been abandoned, but rescued by a well-meaning family friend who said that we just had to take her to live on our newly purchased farm. Shoo-fly had outlived many other cats that came our way. She was wary of people for years, but loved popcorn and chin scratches. By the time she died, she was quite a sad sack – blind, deaf, and pretty ragged looking. A mere wisp of her former self. But up until the last few days, she purred and loved sleeping in the sunbeams on the deck or back porch.

In spring, we had learned that the in-home care person who checked in on my aging mother mother daily was moving. While this was the impetus to finally “force” the transition to assisted living, the timing was rough, and my stubborn mother didn’t exactly agree with us that it was time. Dementia is an enigma to me. How is it that she can’t remember what she ate for breakfast an hour before, but can recall elaborate details from her childhood and her escapades when she was a working single gal in her 20’s? She creates fantastical tales, including ones about her own mother traveling around the world with a cat, perhaps mercifully not recalling that grandma passed away 19 years ago. Mom doesn’t have much to say these days, but the tales about her mother make her smile again. So much better than the horrific night terrors she experienced a year ago.

I don’t want to grow old.

In June, my brother’s family and I cleaned out decades of accumulated stuff from our childhood home. I felt a terrible sense of loss when the house (conveniently) sold quickly and without hassle. It wasn’t the house or the possessions that I was going to miss, it was the loss of connection to place. The process was a ton of work. Literally. I think a ton of stuff was sold at a yard sale, donated to Good Will, or disposed of. But we had some laughs and relived some good memories in the process as we stumbled upon an unexpected artifact of our childhood or old pictures.

It was a long-forgotten love letter from my father to my mother (they had been divorced for over 30 years) and piece of his parachute silk that brought me to tears. For years, my dad had asked if I had seen that square of camouflaged material. It almost went into a trash bag, but that particular box of fabric scraps – one of dozens of old envelope boxes of unfinished projects that we were discarding – just happened to spill, and there was the familiar green and brown swatch. I am holding it as I write. A colleague told me that, sometimes, the hands of angels reach down to gently remind us of loved ones who have passed on. I laughed at the time. I believe her now.

When I was in grade school, my father found for sale some acreage and an old camp along a lake – a wonderful retreat. There were 40 acres of lady’s slippers, trillium, maples and birch, a wonderful sandy beach, and toads galore. And yes, even leeches. Yuck. I still hate them. One of my best friends had a camp – that is what everyone called their weekend getaway in the Upper Peninsula – directly across the lake from us. We spent hours and hours exploring, swimming, boating, coming of age. My father converted the run-down structure into a gorgeous home, but he and his second wife sold it when I was in grad school. I dreamed of winning the lottery to buy that place back some day. It is for sale again, but without the acreage, but complete with a much higher price tag. I live 1000 miles away. With 65 acres of my own to care for. So the wonderful memories will have to do. But so much of who I am today was molded there or in the jack pine/blueberry-laden woods behind our house or on the shores of Lake Superior. Gitche Gumme, the shining Big-Sea-Water of which Longfellow paid homage to in his “Hiawatha.” I will have to read that poem again soon.

This week, another dear family member lay suffering, her prognosis went from being measured in months to days. With some cancers, there is no dignity in dying.

I am sad. Too many passages in such a short time.

But back to that lanky 18-year old, the one I worry about because he spends too much time secluded in his room “gaming” – seemingly wasting this extra unscripted time at home (before he goes off for international destinations). After a long “phase” during which it just wasn’t cool to hang out with the “rents,” he chose this moment to decide that mom is once again acceptable to go for a walk with, or to plop down on the couch with to have long chats about politics or music or recipes.

I teach several environmentally-themed courses at the college level and, like many others, am concerned about the unsustainable exploitation of natural resources (by a relatively small percentage of the world population); the environmental damage we have caused--that often affects others miles or continents away; and the extreme inequities that exist on the planet. Solving these problems will be extremely difficult and require a significant reorganization of priorities (by the wealthy nations); a redistribution of resources; and most likely, a new definition of prosperity. In this blog, I will try to explore what this new definition of prosperity might be. In other words, what are other meanings of a "good life" that aren't dominated by consumption and allow a better quality of life for all living things that we share this planet with? This may be an impossible task, but I will try and invite thoughts from others.